Tuesdays and Fridays are when we work out on gymnast’s rings – my favorite workouts because they work about every muscle in the body and because they are just plain fun. These are also the days were the most folks notice what we are doing – everything from young, built guys trying to watch out of the corner of their eyes without being obvious to folks just stopping what they are doing and staring.


Since my group was in the middle of our routine I took the two young men over to the TRX setup and showed them a number of other moves we use as part of our ring-day workout.  At one point one of the young men asked “You’re over 40 – how is it you can do all these things we can’t”?


My canned answer is that I’m older and had more of a chance to get fit.


Imagine how surprised they were when they found out I was 63.


This kind of interaction occurs more frequently than perhaps is believable.  I spent an hour working out with these two, while also taking my turn with my group on the rings.  Then, while getting ready to shower, another young man, a soccer player, wanted some tips on how to build his obliques.  Then we got into a discussion about indoor soccer shoes, since that is what I wear when working out.


So, you over 40 types – how long has it been since a kid complimented you on your athletic capabilities?

I find it very frustrating, seeing folks I care about getting fat, losing physical capabilities, becoming just plain decrepit – long before they should.  Reality – people are just plain not willing to put out the effort to start down a path that will make their lives unbelievably better. Twice recently I was told “I can’t imagine myself ever going to a gym”.  Funny – they don’t have any problem accepting getting weaker, gaining weight and slowing down.


As I said – I find this very frustrating.  America is a country in a fiscal crisis due to our overfat population – and folks just can’t understand that their senior years could be the best years of their lives – in every way – if they would just get started growing instead of accepting the slow decline path they are on.


Baby steps.  For the rest of your life.  Don’t accept becoming decrepit – turn it around.


Or you can rave about the various beers you find to drink, and the videos you see on You-Tube.


I can only pray that you choose to get started reversing the negative aspects of aging.
Posted by Unknown at 8:14 AM No comments:

I Could Never Do That

A couple of nights ago I found Kelly surfing the internet looking for more exercises we could perform on gymnasts rings.  She was viewing a video of a young man learning to do the iron cross - a classic gymnast-rings position.  The video showed the young man as he spent years working up to being able to do a clean iron cross.  By focusing on his form, and developing his strength, he got there.


I compare this with one gent at the gym - he saw us working on doing the flag (holding onto a vertical pole and holding your body perpendicular to the pole.  Right - it’s a tough exercise.  Anyway, this gent asks if I think I will ever be able to do it.


Time for some background - I’ve introduced him to several exercises to help him develop the muscles and ligaments that protect his joints.  He comes back with ways to make the exercises easier so he won’t have to work so hard.  And complains that he hurts himself doing things around his house and yard.


Another gentleman – met him years ago – he talked about how he would do 20 chin-ups each day, along with lots of sit-ups and push-ups.  As the years went by he mentioned his exercises less and less, until, a couple of years ago, he admitted he didn’t do them anymore.


I could have also entitled this post “When Do We Get Old?” 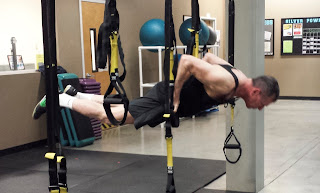 When is it we start putting limits on what we can do?  I suppose it is when we quit pushing ourselves – or we quit doing what we have been doing.  Then, in 4 or 5 years it’s not so much that we choose not to continue to exercise, it becomes we really can’t do what we used to do.  Or, I suppose, we decide we could never do that.


We decide to become old.


Lou Holtz is credited with saying “In this world you’re either growing or you’re dying so get in motion and grow”.  I can’t imagine a world where I would acknowledge that I will not get any stronger.  OK, maybe when I am 80 – at which point I will do all I can to hold onto what strength I have developed to that point.


Interesting quote from the Economist (7/8/17):  “In a survey of Americans conducted by researchers at Stanford University, 77% of respondents said they wanted to live to 100, but only 42% claimed to be making a real effort to get there.”


Neither the desire to live a long time, nor the fact that only half suggested they were doing something to live longer comes as a surprise.  Reality?  Aging and becoming decrepit sort of go together unless one does all one can to slow down the decrepit part.  Aging, we all will age, unless of course we die.  It’s the decrepit part that we can fight.


I wish that I could lay out a plan to take someone who is 30 pounds overweight to being fit in the next 6 months.  Sure, if someone goes vegan, cuts out excess sugar doesn’t ladle on the salad dressing and rich sauces – they can lose a pound a week or so.  That is really the best one can realistically hope for.  Now for the fitness part.


Two words – Baby Steps.  Sure, you could go out and start doing lots of weight lifting.  And, likely trash your shoulder, back, elbow and/or knee.  This is where you need to be the master of your own destiny.  Yes, there is a place for weight-lifting, and cables, and all those fancy machines that make health-clubs so equipment rich.  And, each piece of equipment allows you to focus on a muscle/muscle group or two.  If this is your thing – get started!


I prefer body-weight exercises – all the “UP’s”, like push-ups, pull-ups, chin-ups, sit-ups.  Throw in the plank, burpee, dips, calf raises, lunges and squats – hey, this is quite an exercise routine!


As you get to where you can do a few of each, think about variations.  I can assure you there are more than enough variations to allow you to become extremely fit, though, face it, this is probably months down the road.


The thing you need to do is get started.  Determine how many push-ups you can do.  OK, none?  That’s ok.  Even knowing that is progress!  If none, try doing them with your knees on the ground instead of your toes.  No matter how many or what kind – the critical element is that you work at doing more in two weeks.  And just keep that up.


In this world you’re either growing or you’re dying so get in motion and grow.


Same thing with chin-ups.  Most gyms have an assisted chin-up machine – or rubber exercise bands. Again, all that matters is that you can do more a month from now.


Sit-ups – try doing them on an inflated exercise ball.


Trainers are your friends.  Just realize, it’s up to you to make progress.  The internet is an even better friend – there is so much excellent information for those getting started.


Thing is, you are trying to grow – which means you will likely be using muscles and joints in ways they haven’t seen for years, if ever.  You need to protect them as much as you can – which means stretching.


Lastly – joints:  Search “Joint Exercises”:  Lots of options – let’s see – weak shoulder rotator cuff muscles – coupled to a trip and fall?  Darned good chance you will have a torn-up shoulder.  Start strengthening joints to give your body a chance to handle more of life’s little challenges.


Every couple of months someone will tell me that they listened to what I said some time ago and got started.  Recent example – guy in his late 60’s – started walking more and cut out most meat.  Now down 40 pounds and actually exercising most days.  The change in his reality is awesome!


Bottom line – You don’t have to watch your health and fitness decline – you can turn it around.  Starting today – eat better, and start doing something about your fitness!


And, a year from now, I look forward to hearing from you – about your weight loss and increase in strength!!!
Posted by Unknown at 3:44 PM No comments: